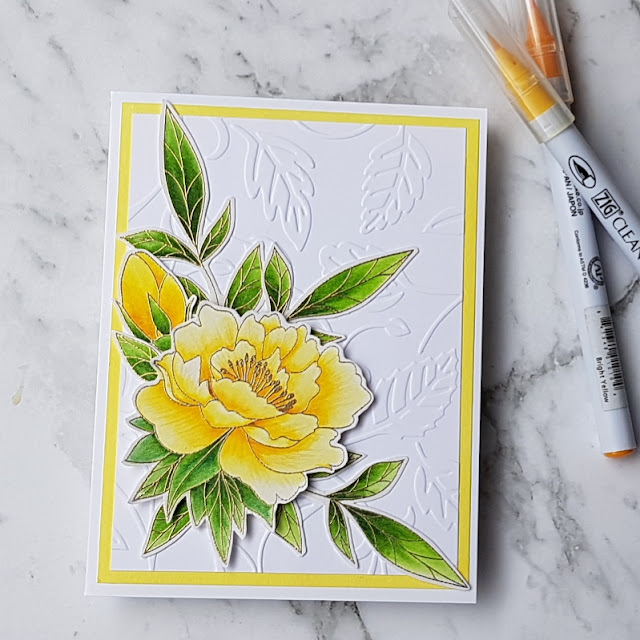 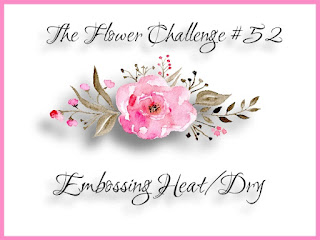 Images were stamped on bristol smooth cardstock with versamark ink and gold heat embossed. I coloured them using Zig real colour brush markers and added some colour pencil over that.
Zig colours used were yellow, bright yellow, light green and deep green. I love how the gold heat embossing looks with these colours.
Using an embossing folder from sizzix, I embossed a white panel and then adhered this to a yellow panel and then a cardbase.
Images were fussy cut and adhered. the main floral image is on foam tape and everything else is adhered onto the embossed panel. 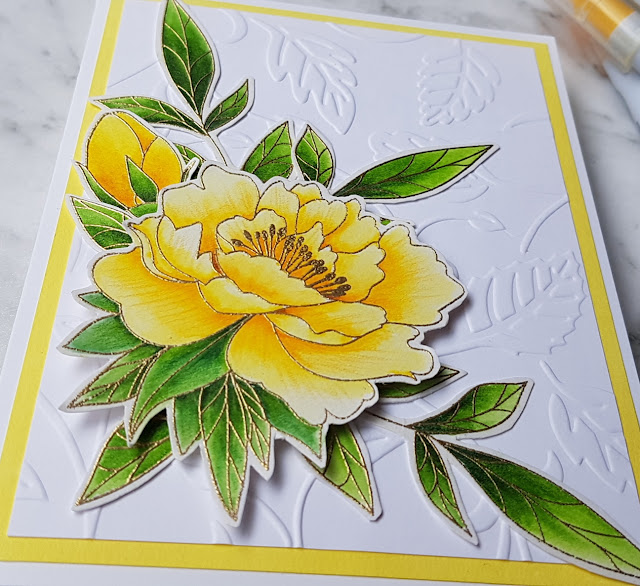 Thanks for stopping by,
Helen xo
4 comments: 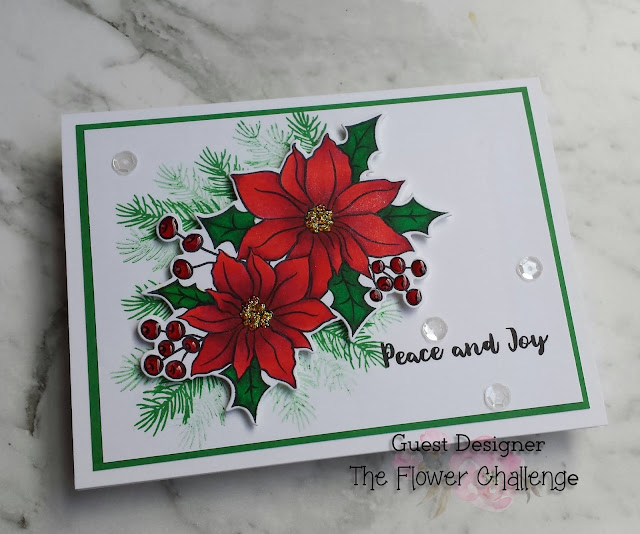 I'm so excited to be guest designer on The Flower Challenge. Thanks so much for asking me, Viv. The theme is add embellishments and what better time than Christmas is there for adding embellishments. 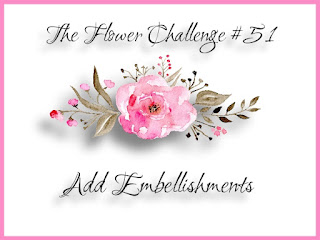 The stamp set I've used is Holiday Bouquet by Avery Elle. The main image was stamped in momento tuxedo black and coloured with copic markers.
Flowers are R24, R37 and R89. Flower centres are Y17.
Berries are R37 and R89.
Leaves are G09 and G28.
The image was cut with the co ordinating die. On a piece of cardstock smaller than my card base, I determined where the flowers would go and then added in greenery behind.
The pine needles are stamped using LDRS creative four leaf hybrid ink doing first, second and third generation stamping.
Before adhering the flowers on foam tape, I stamped the sentiment from the same stamp set.
I added the panel to a green mat ( made by inking the edges with the same green ink) and adhered this to my card base.
Now for the fun part. Adding embellishments!
Nuvo shimmer pen on the flowers. ( difficult to see in photos)
Nuvo gold glitter drops for the flower centres. I start with 3 or 4 drops with enough  space between so they remain distinct drops. Once they're dry, I put more drops in the gaps. This gives dimension rather than one big blob.
Glossy accents on the berries.
And finished with some iridescent clear sequins. 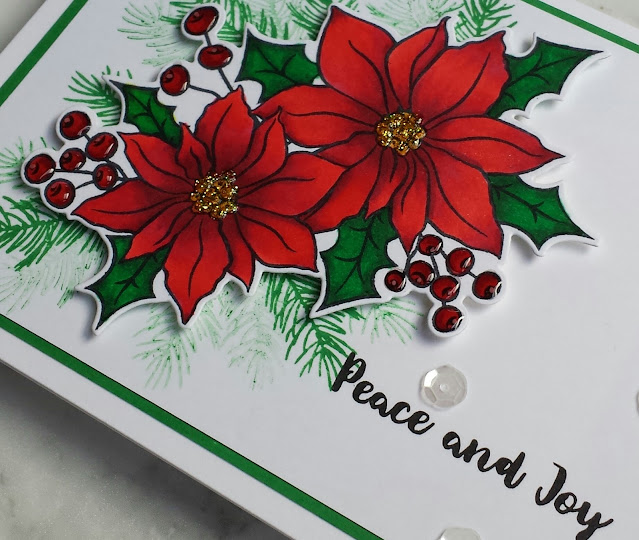 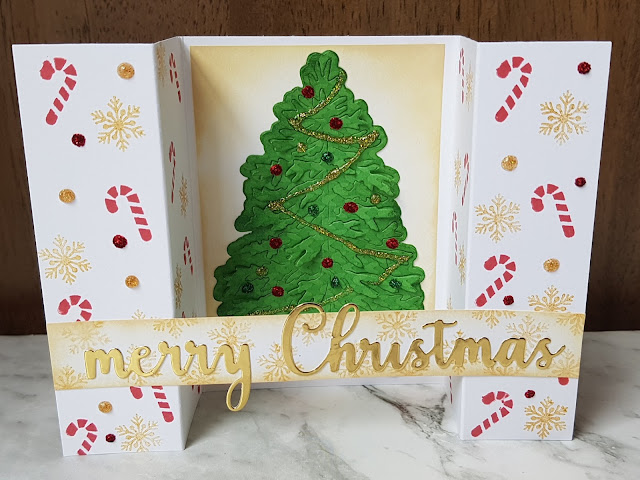 I was inspired by the wonderful Kelly Bates for this card. You can find her card Here and  I used her measurements.

I didn't have suitable Christmas paper so I stamped each end using images from My Monthly Hero Nov18. The snow flakes are golden glitz Delicata ink and the candy canes are red ruby from Hero Arts. 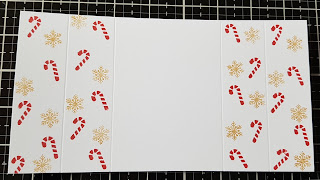 The tree die cut is My Monthly Hero Oct18 and I cut it from Lawn Fawn Knit Picky paper for some texture. 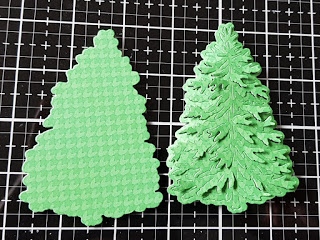 I inked around the edges of the tree with dark green ink and adhered the two pieces together. I then added a garland and baubles using red stickles and Nuvo glitter drops in honey gold and emerald city. 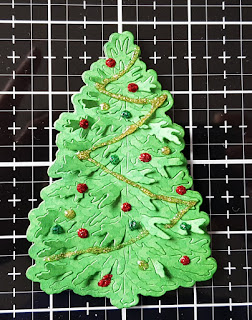 After waiting 24 hours for everything to dry, I adhered the tree to a panel I'd inked the edges with antique linen distress ink and then adhered this to the centre panel on the card.

The gifts under the tree are from a small Lawn Fawn birthday set and are coloured with copic markers with white gel pen details.

The bridge is 2 layers of Neenah 110lb, edges inked in antique linen and stamped as per card.

The Merry Christmas sentiment is Memory Box and cut from gold mirror cardstock.
The bridge was cut to .75 by 5.5 inches. This was slightly too long due the bulk on the inside of the card.
So I adhered the left side only, folded the card flat and then adhered the right hand side. I was then able to trim off the tiny amount off excess. 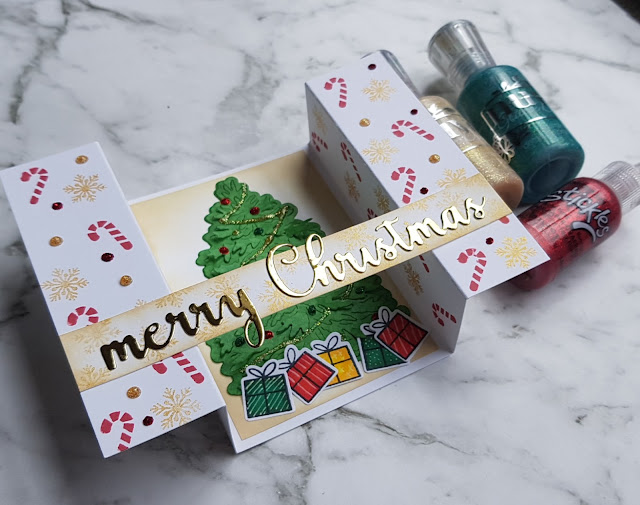 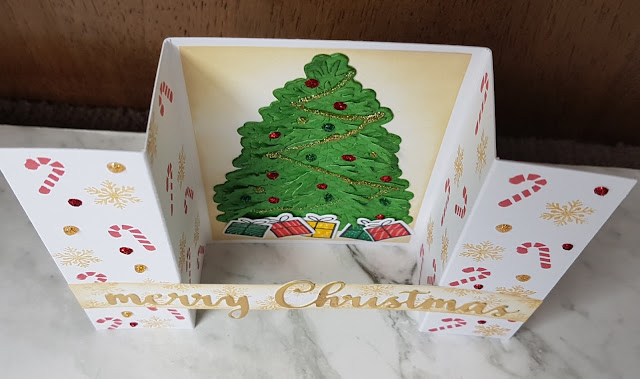 I finished with more red stickles and gold Nuvo drops on the left and right sides.
Thanks for stopping by,
Helen xo
No comments: 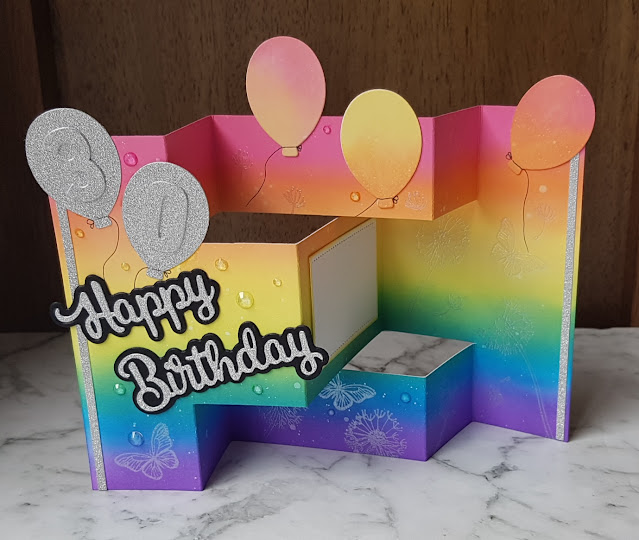 A birthday card for my beautiful daughter.

Then perfect pearls in water splatter. I then waited til the next day to score and cut. I was worried the scoring would remove the ink but it worked beautifully. 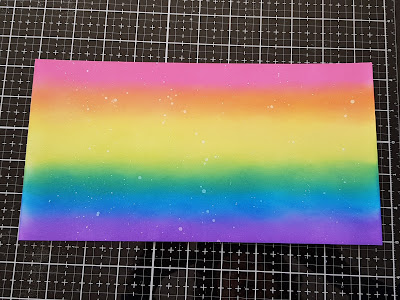 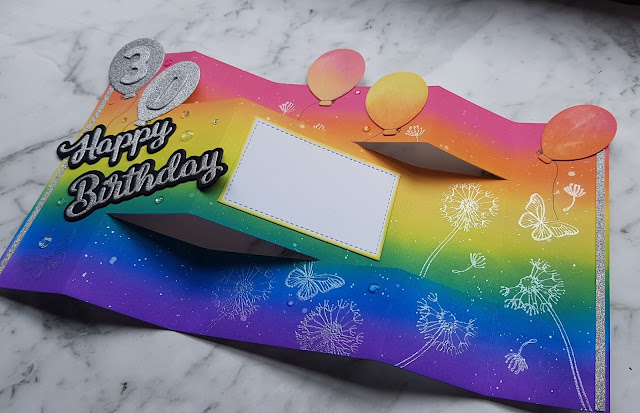 Fairies In The Forest Celebrating A Birthday 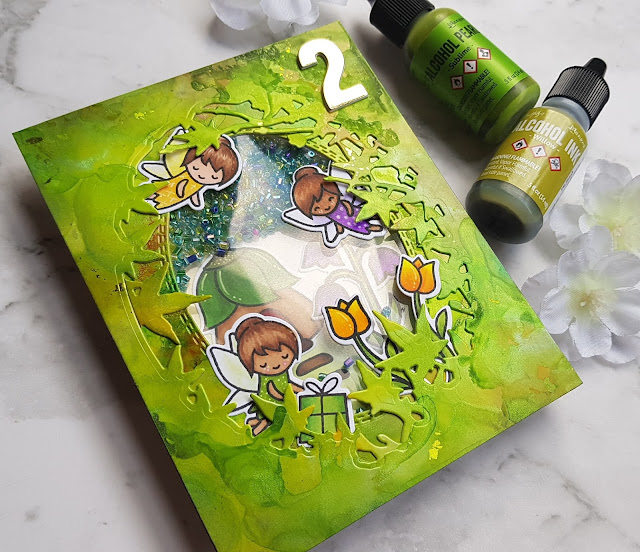 This card is for my granddaughter who's turning two soon. Where does the time go??

I started with 2 panels of shiny cardstock and used alcohol inks in pearl sublime ( main colour), with small amounts of willow, patina and sunshine yellow. The alcohol pearl ink gave a beautiful shimmer. I also added some gold foil.

When they had dried, I trimmed them both to card size and chose the best one and used a die from Hero Arts my monthly hero September 18 to cut out the centre.

I then used an oval die to cut out the middle of the other panel. I adhered to two together, but only around the outside edge so I'd be able to tuck the fairies in .

I saved the off cuts to cut letters for Veronica's name using Hero Arts Uppercase Alphabet Fancy Dies and a couple of extra leaves I tucked in. 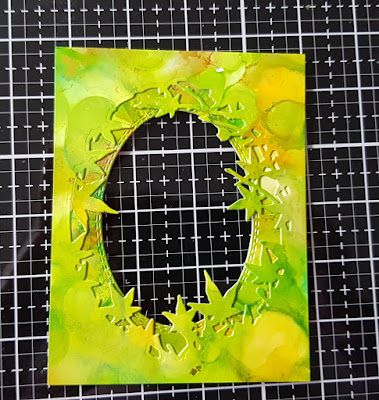 I thought it needed more, so inked around the edges with black soot distress ink ( as seen in the final photos).

I stamped and coloured with copic markers the fairies, house and flowers from Lawn Fawn Fairy Friends stamp set and used coordinating dies.

On another panel, I softly blended distress inks antique linen and mowed lawn. I regret not adding more texture here but we live and learn. This panel was adhered to the front of a Neenah desert storm cardbase. To this, I adhered the fairy house and some flowers.

I then removed the rest of the release paper and adhered this to my cardbase.

I tucked the fairies and some more flowers behind the leaves and added a gold 2.

I gold heat embossed Happy Birthday on an off cut but didn't like it on the front of the card so adhered it inside. The inside images are stamped in Momento rich cocoa and coloured with Prismacolor pencils. 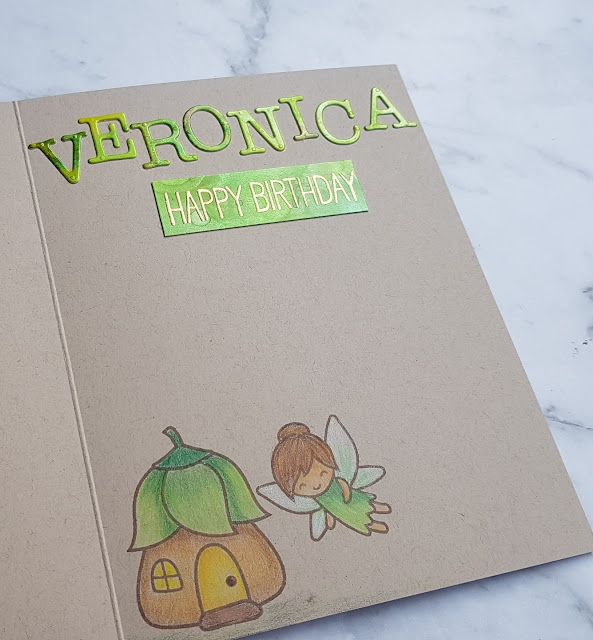 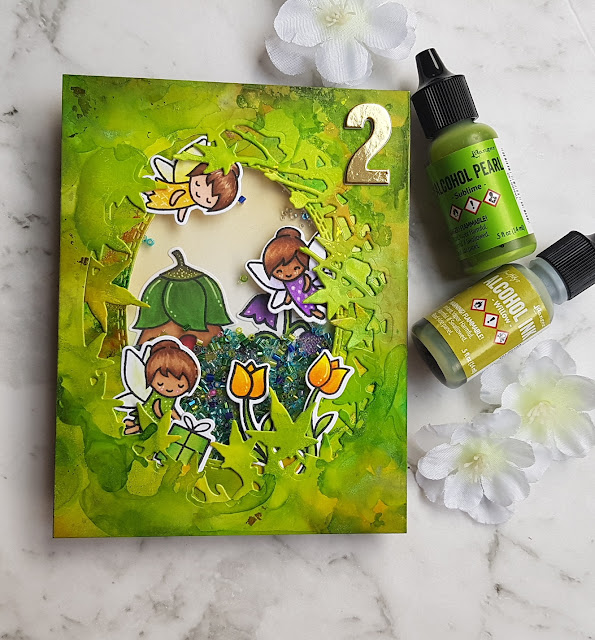 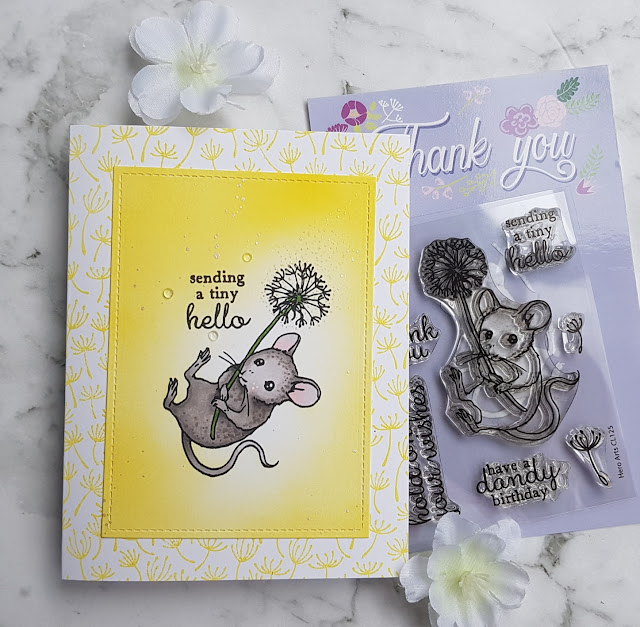 The new challenge for a blog named hero is "cute" and what could be cuter than this sweet little mouse from Hero Arts so I thought I'd enter this card.

I started by stamping the image with momento tuxedo black ink onto Neenah 80lb card because I wanted to use copic markers. I left the stamp in my stamp positioner because I wanted to re stamp it when I finished colouring. I then masked the mouse.
With the mouse safely masked, I used a makeup brush to blend mustard seed distress ink around the edges, leaving a halo around the mouse.
I then did spatters of perfect pearls powder in water to add interest.
The mask was then removed and the mouse coloured with W1, W3, W5, W7 with R20 for the ears and cheeks. I then re stamped the mouse with Versafine onyx black and then the sentiment with the same ink.
I cut the panel with a stitched rectangle die and adhered it to a cardbase that I had stamped with Hero Arts blowing in the wind background stamp. I used squeezed lemonade distress oxide ink and clear heat embossed it.
I added dots of a Gelly Roll sparkle pen around the dandelion and trailing up and some clear droplets around the sentiment. 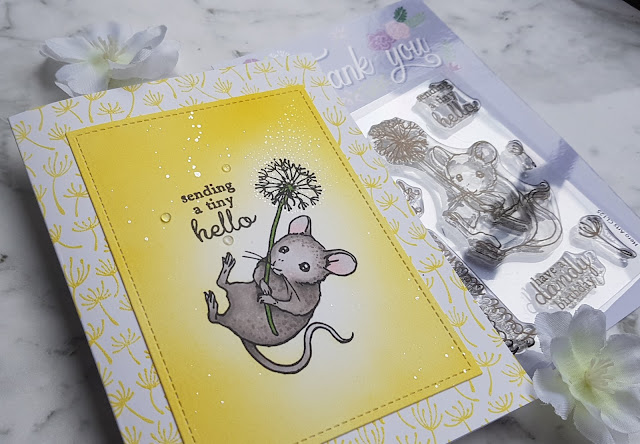 Thanks for stopping by,
Helen xo
No comments: 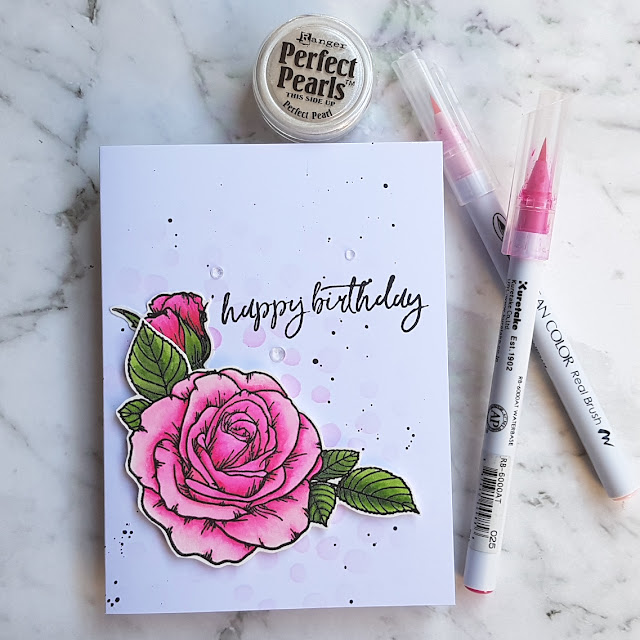 I'm entering this card in The Flower Challenge. 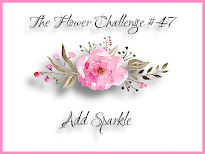 I stamped the images from Paper Rose Studio Sketchy Roses in Versafine onyx black ink onto bristol smooth cardstock and clear heat embossed.
They were then coloured with Zig brush markers using pink, light pink, deep green, light green and perfect pearls powder.
I laid down the darker colour first, pulled that out with the lighter colour and then pulled that out with perfect pearls mixed with water using a paint brush. This gave a beautiful shimmer to the flowers.
On the card base, I lightly stencilled a dot pattern using hero arts bubblegum pink ink, making it darker where the flower would be and fading out to white.
The black spatters are black soot distress ink mixed with a little water and more perfect pearls because, lets face it, there's no such thing as too much sparkle.
I stamped the sentiment, fussy cut the images and adhered with foam tape.
I finished with some clear sparkling jewels from pretty pink posh for more sparkle. 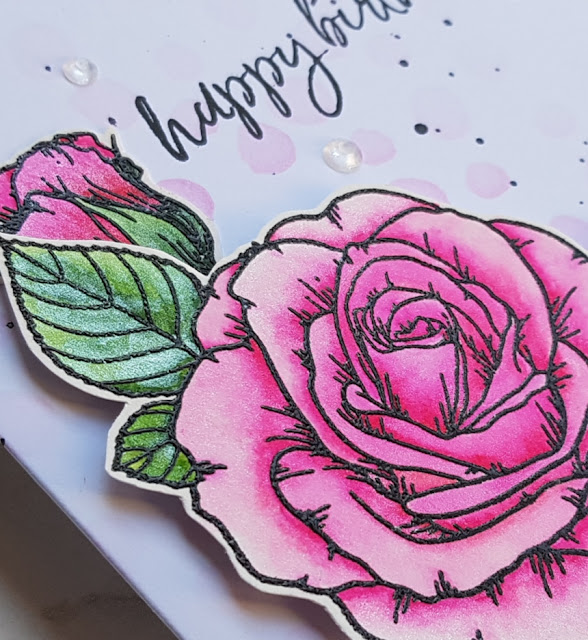 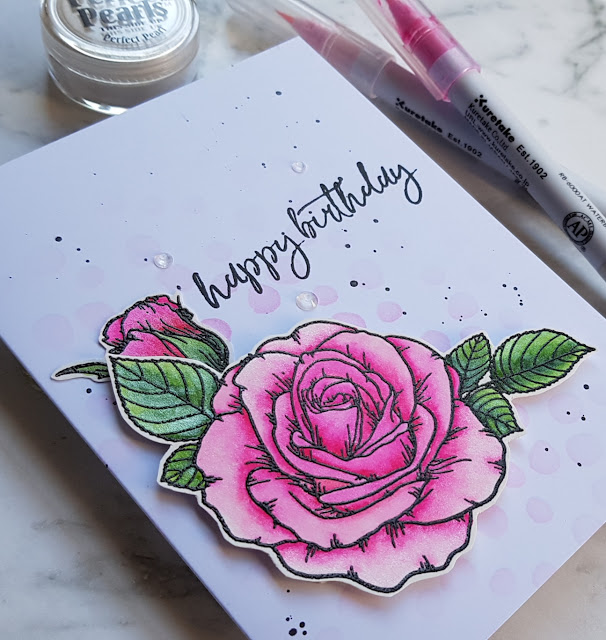 Thanks for stopping by,
Helen xo
6 comments: 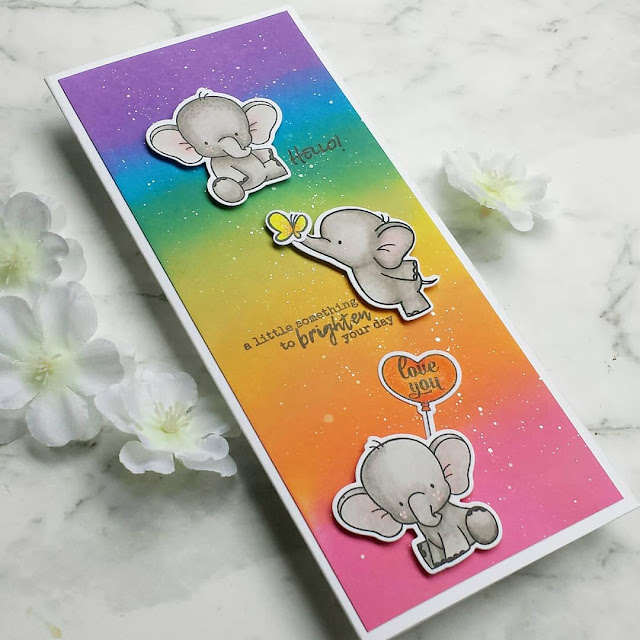